I reported yesterday that Mom hurt her hand on their trip, and I'm happy to report she's just fine now. I was a bit worried about her though (as it was her typing and petting hand), but other than some swelling and slight bruising she is all good. How it happened was odd so I thought I would put it out there for your review.

My parents went to San Diego to meet up with Dad's family for Pre-Thanksgiving. They all had a great time (apparently with no worries about their abandoned pets at home), and enjoyed dinner in Old Town. They decided to walk down the quaint street and do a little window shopping. Mom was quite taken by the gaslights on the old street. She was walking past this cool old house, when she noticed a candle glowing in the window, and felt herself drawn towards the house. She was wondering, as she was wandering, what the house was used for, because it looked preserved. 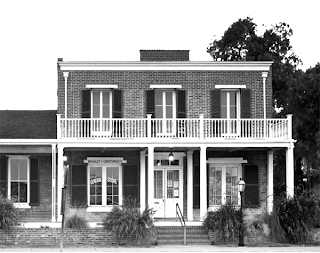 Suddenly she felt herself falling forward, and realized she was going to fall flat on her face. The next thing she knew, her hand and wrist landed against the brick planter wall in front of the house, and she managed to brace herself from a full fall.

She sat on the edge of the planter as Dad ran to get ice and his Mom went to get the car. As Mom was catching her breath, she realized she'd walked right off the sidewalk and into the small patch of dirt in front of the house. She's a klutz, but even for her it was odd to be so distracted.

Just then a group of people walked by and a woman looked right at Mom with an odd look and asked "Are you doing the haunted house thing tonight?"

"Um, no. I'm just waiting for someone." Mom responded as the woman moved on down the street passing a historical sign which was pointing to the house. It was called the "The Whaley House" and it turns out Mom fell in front of the most haunted house in America (cue Twilight Zone music).

Did a ghost push her? Did a ghost guide her to fall into the planter so she didn't hurt herself too badly? Is she a massive klutz?

She's decided it's a cosmic push to not allow her own ghosts hold her back. I think it might have been the ghost of the Whaley dog, irritated because of my abandonment, but you decide for yourselves.
Posted by Quill and Greyson at 12:00 AM