First, I'd like to thank all of my friends for dropping by yesterday and leaving such kind words during this tragic time as I mourn the loss of Feather the Second. Sadly he can't be saved. Mom tried to just tie him back on his swing pole, but it was too much damage ::Sniffs and holds back tears::


I will be ready for another Feather some day, after a proper period of respect (Mom's next trip to Petsmart). It's just that Feather the Second was so special. It looked just like my SIFs tails and it was brought home to replace Feather the First. Feather the First was also cut down in his prime. Luckily he was rescued from death's door (he was just a string on a pole with a couple of brown feathers at the end). He was sent to live on the Feather Toy Farm.
Mom was worried I was eating the plumage as it fell off, but I don't know why she thought that. 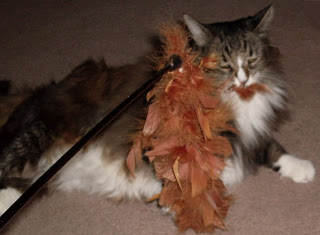 I was going to spit it out...
I know Feather The First is in the country being chased by farm cats, but still I miss him too.
I hope Feather The Third will be pink, and sturdy.
Posted by Quill and Greyson at 12:00 AM