Well they caught me friends. My days on the counter promised land are done. 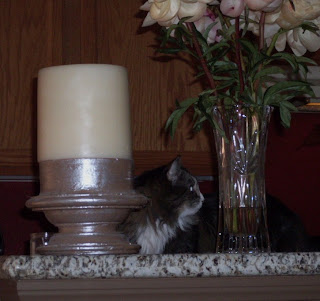 -
I was living high on the hog, and high on the kitchen counter, when suddenly I was cut down in my prime. How was I doing it they wondered. I'd managed to evade their silly barricades at the ends of the counter. They pulled the dining table way back and tucked in all the chairs - just in case. Still I persisted in jumping where "I'm not allowed."  I laughed in the face of their rules.
I'll admit it, I'd grown a bit brazen in my defiance. I felt invincible, on a high from the longest run of counter jumping since I was in my kitten-hood. I snickered at their demands I "Get Down!" as if they had told an amusing joke.
It all began one night when Dad dusted behind the TV and left a cat-sized gap behind the TV on the stand. The stand sits right in front of the back side of the counter, so it was really a straight forward double hop and I was on the counter.
They never suspected a thing.
Until I was brazen, and I called attention to myself at the wrong moment. It was clearly showboating that made me paw aggressively on the back of the TV screen (I may even have meowed out loud as I did it). Mom looked up and saw immediately where they had made their mistake. I think she might have let it pass, because she saw how much fun I was having up there, but when Dad saw me, it was all over.
I'm back to the drawing board now. Not to worry kitties, I won't be down for long. We Grannycats have ways. I won't be denied. As so many of you pointed out, it's My Counter too.
Posted by Quill and Greyson at 12:00 AM