Well friends it was almost a Floofless Friday. It all started innocently enough, as most things do, at the bathroom sink. I was waiting for Mom to turn on my faucet so I could dive in for a sip. Mom had left her future shower towel on the counter and, since it was in my spot, I nestled on it.

When Mom emerged from her shower, she was bothered about me being on her towel - something about cat hair and wet flesh - who listens, not me. I really stretched out as she dried herself off with another towel and got dressed. Maybe it was the irritation that made her pick up the Zoom Groom and begin to aggressively comb at my side floof.

She caught the edge of my floof with the Zoomy and pulled it across the towel. She noticed that it stretched out my furs and made it easy to see the loose strands. I noticed the aggressive noise it made. We were both excited at the process. One side of my body was defloofed, but I drew the line when she tried to get to the other side.I was over-stimulated and a little warning bitey was issued.

I must say I did really enjoy it and the sleek furs were very nice. I might even pretend to not notice the other side being groomed next time.

I know you need your fix before the weekend can begin so behold - Me, pre-de-floofing. 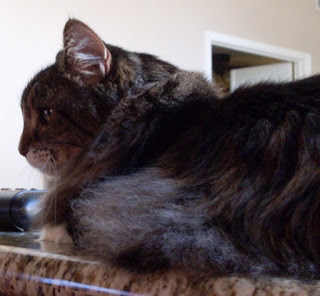 Now Imagine half of that side floof gone, don't worry there's still plenty left. Enjoy your weekend friends!
Posted by Quill and Greyson at 12:00 AM