Mom here. I realized the 15th of October is Quill's half-year Birthday. Well as near as I can guess. He came to us when he was such a little kitty. The first night we met, he sat in my hand and tucked his head under my chin. I was smitten. He had me at squeak.

You may remember we had thought Quill was a girl at the start. We were pretty open to who our new kitten would be, but we were sure we wanted a girl.

I wanted a lap kitty, maybe on the smallish side, and well mannered.

Instead we got a boy (figured that out three weeks later when the Vet surprised us) who's independent, huge, and is wee bit naughty in the best possible ways.

He is nothing we thought we wanted, but everything we needed. Quill is such a joy for us. He has helped to heal our hearts and fill them with a totally new kitty energy.

This morning I got a wave of the sads, missing my sweet Finny. A moment later Quill sauntered in with his rat toy proudly in his mouth. He's not shy about his love for a rodent like my girl was, but he's every bit as loved. 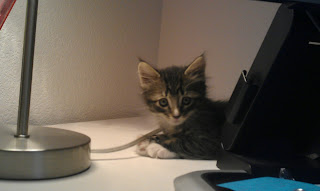 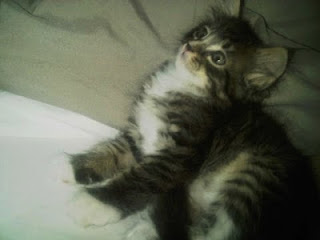 Posted by Quill and Greyson at 6:34 PM