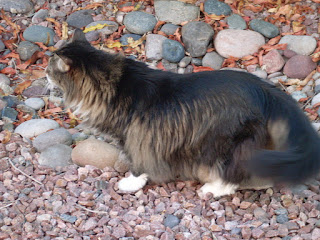 Psst, Friday? Are you out here again? 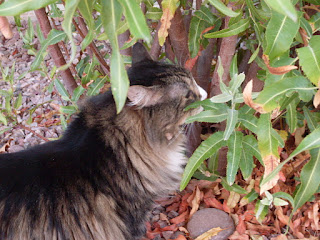 Kinda smells like Thursday... Nope, Friday! Woot!
Thank Cod It's Friday! My Dad is gonna be busy carving up pumpkins and Mom is looking forward to watching scary movies. I like it when she watches scary movies cause she likes to snuggle me close. I do have to be careful of things that make her jump though, cause she's a tosser.

True story (according to Mom) when she was a young human she went to see a movie, and because she likes to feel "one" with the movie, she sat in one of the front rows with her big sack of popcorn. She had just settled in when the trailer for the movie "The Fog" came on, suddenly a hand jumped out of the fog and she tossed her hands up to her face... unfortunately she still had the popcorn sack in her hands. So there she sat in a shower of popcorn which landed all over her.

There was a couple of seconds of dead silence in the packed theater before the whole place started to laugh. She was picking kernels out of her hair throughout the film to the snickers of the audience. At the end, as they began to exit the theater, the man sitting behind her sat forward and patted her on the shoulder as he whispered "You were the best part of the movie!" and they both laughed together.

Mom has always dreamed of being part of the movies, and since she can't be tossing popcorn in every theater, she's decided to write a screenplay. Someone has to write them right? I approve of this blatant disregard of writing my next book because it's got tigers in it.


::Shameless Plug Alert:: For any of my new readers I do have a book out now, also called Housecat Confidential, and it's available in pretty much all the e-book formats and in paperback on Amazon. ::End of the Plug::

Hope you are all having a great weekend. What do you have planned friends?
Posted by Quill and Greyson at 12:00 AM