Jim: Well Bob it's been an exciting week so far and it's only Wednesday! I wanted to mention the upset that happened here at the Host Nation of Fin-Land yesterday. Seems the "No Rules" rule of Cat-O-Lympics was breached by the judges, causing a mistaken disqualification of Finny in the Balance Beam.
Bob: I understand that our hostess has been award her medal. Let's listen in to her acceptance speech Jim.
Finny: Well a cat, especially a grannycat, should have any route she chooses to get on and off the apparatus. I totally stuck the landing, and the style points were off the charts... I had a dangling back paw for balance and a three paw landing. Plus there are no rules so anything should be allowed. I'm glad this wrong has been righted. We're cats, we rarely follow rules... that's how we stroll.
Bob: Now that's a class act! So Jim, I heard rumors that cats can add new events to the line-up at anytime by using the Mr Linky here, but Jim, that can't be right can it?
Jim: Yes Bob. As I've said before, there are no rules. Events are being created and posted at a breakneck pace. Cats can feel free to take the commemorative award shown on Monday's post for participation.
Bob: Wait Jim! I'm hearing from the booth that we have breaking new footage coming in from the field. 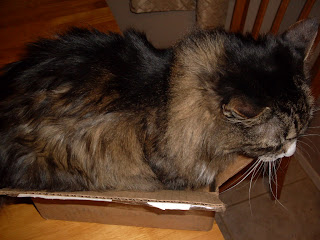 What are we looking at here Jim? I think I'm confused... 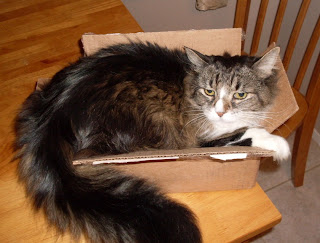 Jim: Bob, it seems our Hostess has a different take on the Boxing competition.That's a senior kitizen for you, they know how to work the competition to advantage. It's a tight fit too, but she has done it! Tomorrow she will be competing in an Ice Hockey match. It promises to be quite a competition! Play safe out there competitors!
Posted by Quill and Greyson at 12:00 AM