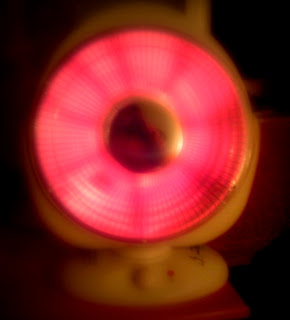 Fade In: Interior Bedroom: Early morning light comes through the drapes as we see two humans in a tall bed. The male and female are snoring loudly. Under the sound of the snore we begin to hear the drone of the Evil Alien Eye.

The Evil Alien Eye (EAE) shifts it's eye from left to right and back again as it searches for our heroine Fin. Fin sits nervously at the mouth of the bedroom door (just out of sight of the EAE). She looks at the light coming from the window and notices it is getting brighter. She paces nervously. She scoots quietly farther into the room and checks to make sure she is still not in EAE's vision.

Fin (timidly): Meow... [there is no response from the humans and she checks to make sure the EAE is not able to see her] MEOW!

Still no response from her human parents. We see our heroine crouch low to the ground and scuttle quickly by the EAE on it's dresser perch. She is still safe from it's evil glare.

EAE (louder as it senses the presence of our heroine): BBBBUUUUUUZZZZZ!

Fin sees the light is even brighter and rightfully senses it won't be long before the Evil Noisy Box on the bed stand will come to life and attack her sleeping Mother. She must make her move now. She moves quickly to the foot of the bed and leaps up onto the bed. She races down the side of her Mother, using her as a shield.

Mom (sitting up quickly): Huh? What? Finny? [Mom scoops Finny up in her arms, and turns towards the EAE. Fin begins to flail] See sweetie you don't need to be scared, it's just a heater. See how warm it is?

Fin breaks free of the hold and races back to the safety of the hall. Mom hits the Evil Noisy Box into submission, at least that danger has been adverted. She watches in horror as Mom gets up and walks closer to the EAE.

Mom grabs the EAE by it's throat and chokes it until it's eye stops glowing. Mom and Fin walk into the kitchen for a celebratory meal, leaving Dad and EAE alone. The light begins to glow again...

EAE (quietly yet with menace): Buzzzz

Fade Out
Posted by Quill and Greyson at 7:24 PM

New comments are not allowed.