Mom here. I wanted to tell you all about a mysterious little habit Quill has.

He has two food dishes, one in the kitchen and one in our master bath. He eats out of both and they are identical bowls. They were both Fin's originally.

In the master bath he eats all the food, but in the kitchen he only eats half. Not just any half either... He eats the food off the side of the dish facing out, but he won't eat the food that collects on the opposite side of the dish.

At first I thought it was too far for him to reach, although he has plenty of room to eat from both sides, and it isn't a problem with the identical dish. I always pile in the middle, so he has to nose it over to the far edge.

I tried pushing the food back into the middle - he pushed it to the far edge and left it. I mixed it in with new food - and half of it (I suspect the correct half) was all pushed back to the far edge. I threw it all out and started over - half of it was pushed aside. I thought I was really smart, and I just turned the plate around - he ate the food on the far side and left the close side that had been the farther side.

It suddenly made this odd quirk the sweetest thing. When I saw it, I imagined my girl waiting in the same spot for her meal. Of course she would have refused dry kibble and demanded gravy, but I was suddenly happy each time I saw it.

Anyway, a few days after I had this thought, I went out to the kitchen and found this arrangement... 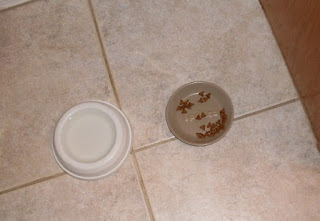 I know it seems crazy, but seeing that little smiley face in kibble... well, I just think as crazy as it seems - there are bigger forces at work here.
Posted by Quill and Greyson at 4:40 PM