Jim: We're back to call the Wrestling event. This has proven to be the biggest competition here at Fin-Land. The next four days are going to be devoted to this exciting event. Let's get right to the action! First up in the Solo Wrestling category is Katie of Glogirly. 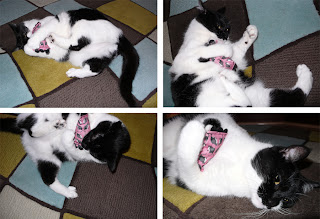 Bob: I had no idea wrestling could be a solo sport Jim! Looks like Katie is wrestling with her little pink pillow, ah that's so cute!

Jim: Anyone who knows Katie knows cute is not in her vocabulary Bob, she's a deadly competitor! Next up we have Odin and Domino from Cat Wisdom 101. 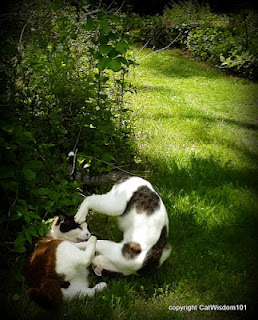 Bob: Look at Odin giving Domino that upper-cut to the head with a roll!

Jim: An impressive showing! Next up we have Tommy, a doglete, wrestling with catlete Genji of The Poupounette!

Bob: An inter-species match Jim? I think we all know how this is going to turn out!

Jim: I wouldn't be so sure Bob! 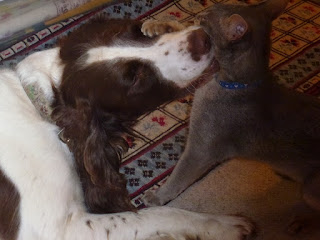 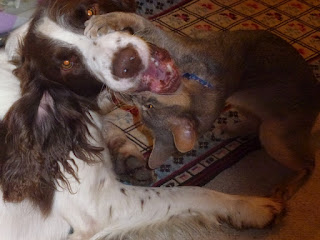 Jim: Oh My Cod! Little Genji has Tommy in a two-paw headlock! 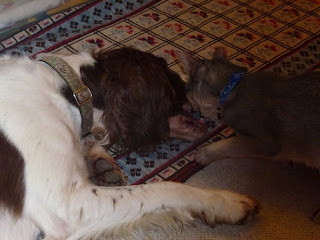 Jim: Looks like Genji has Tommy down to the mat! It's a clear victory for the fierce little catlete!

Bob: Now we have two young catletes, Sweet Mahoney the tabby and the Feisty Two Two the black and white from Marg's Pets.

Jim: I understand Mahoney suffered an injury to her back legs recently and has been taking it easy from wrestling as she recovers. These photos were taken prior to her injury.

Bob: We have a recent report that she is recovering well, but I'd like to take a moment to offer purrs for her speedy return to the sport. ::Inaudable::

Jim: ::Covers Mic:: Are you purring Bob? Cause for humans it's really more of an implied purring, rather than actual purring.

Bob: ::Covers mic:: I just really want to the little one to get better...

Bob: I think that will help, now on to the action! Mahoney starts strong with a bite to Two Two's back paw. 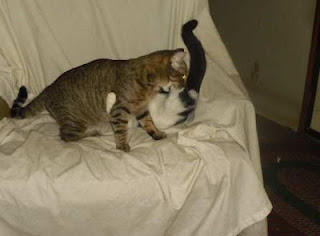 Jim: Looks like Two Two is fighting back with a chomp to the elbow and a bunny-kick to the cheek! 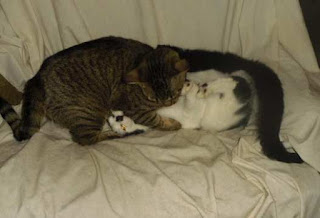 Bob: And Two Two pins Sweet Mahoney to the sofa with a two-paw hold!! 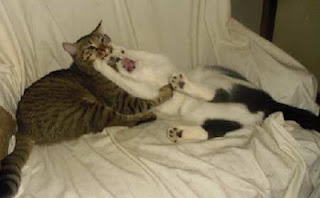 Jim: With that open jaw I think we have to call this one for Two Two!! Oh it was a great match Bob! Can't wait till tomorrow!

Note: Looks like Jim and Bob are getting out - our new friends at Four White Paws have a Jim and Bob tribute.
Posted by Quill and Greyson at 5:00 PM