Norway at last, and it's lovely. The carpet ride was very nice, no turbulence to speak of. We flew over a number of the main cities in Norway on the carpet.

We went to Lillehammer which is where the Olympics were held. Of course Siena wanted to zoom zoom down the bobsled run on the carpet. I was hesitant, but after some encouragement by MoMo and Miss Kitty, I said yes. What the heck you only live nine times right.

We dropped by Bergen which is right by the water for some much needed fresh fish. We declined the locals offer to go ice fishing. We have snowshoe paws but still, brr.

Being forest cats naturally we had to go see the forests. So we headed past the Fjords and into the forest land. The big cities were few and far between so we stopped in a small village. Although our notoriety had not spread here (no Internet access) we were welcomed by the village cats with headbutts and licks. Of course all the young mancats were after the young one, although we three older kitties were called cougars (odd) and got some of the attention too.

We enjoyed a welcome party in the local pub and we showed everyone how to make a good and dirty Niptini (well that sounds naughty but it really wasn't). Since it was dark our new friends suggested we stay in the village till morning, so we snuggled under the carpet by a little cabin and waited for the sunrise. When we woke up we saw it had snowed. Boy it sure was lovely.

Then it was off the forest at last. Here we are in the forest (one of our new friends was nice enough to take our picture). 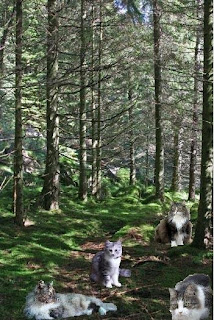 After of plenty of climbing (and some leaping from tree to tree, and some nerve wracking running straight down the tree by Siena) we were all exhausted. So we all snuggled under the carpet for a long sleep. Tommorrow we are headed off to my place...

PS – I might go rogue and borrow the carpet for a quick adventure… I saw this in a brochure… "The land above the Arctic Circle is known for midnight sun, northern lights, the Sami people in Finnmark, and polar bears at the Svalbard Islands." It sounds a bit dangerous, what with the polar bears, but Finnmark? Come on! Hey do you think I can pick up some meatballs in Sweden?
Posted by Quill and Greyson at 12:00 AM